and , /PRNewswire/ --  (NASDAQ: OPRA), the browser developer and consumer internet brand, today announced its acquisition of  YoYo Games, creator of the world's leading 2D game engine, 2, for approximately .  The tuck-in acquisition represents the second building block in the foundation of Opera Gaming, a new division within Opera with global ambitions and follows the creation and rapid growth of  Opera's innovative Opera GX browser, the world's first browser built specifically for gamers. 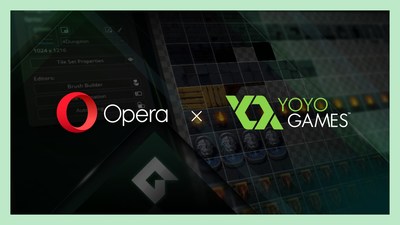 , EVP Browsers at Opera, said: "With Opera GX, Opera had adapted its proven, innovative browser tech platform to dramatically expand its footprint in gaming. We're at the brink of a shift, when more and more people start not only playing, but also creating and publishing games. GameMaker Studio2 is best-in-class game development software, and lowers the barrier to entry for anyone to start making their games and offer them across a wide range of web-supported platforms, from PCs, to, mobile iOS/Android devices, to consoles."

, Head of , Opera Gaming, added:  "Gaming is a growth area for Opera and the acquisition of YoYo Games reflects significant, sustained momentum across both of our businesses over the past year. Our new Opera GX browser hit 7 million MAUs in December, 2020, up 350% year over year,  while YoYo Games' GameMaker engine achieved 400K new registered creators in 2020. We're tremendously excited by the opportunities the combination creates not only for our combined users, but also for the expansion of Opera's gaming community."

, at YoYo Games who will remain with the business alongside technical lead , stated, "For over twenty years, the vision behind the GameMaker engine was to not just create more games, but expand development within and beyond the game studio. We think the transaction with Opera - whose products are known, trusted and used worldwide by millions of people every month- represents a massive opportunity to accelerate fulfilment of that founding vision, during a period of exceptional growth for both companies."

"We are very excited to start working with the team at YoYo Games," said , EVP Browsers at Opera. "We see the platform as being an ideal acquisition to complement our global ambitions in gaming, and to help drive awareness and traffic to our Opera GX gaming browser."

Opera GX, YoYo Games and GameMaker will unite under Opera Gaming, focusing on innovating across the gaming, game development, and browser experience. "We look forward to further growing Opera GX and driving the growth of GameMaker as part of a broader ecosystem, making it more accessible to novice users and developing it into the world's leading 2D game engine used by commercial studios," continued . "Opera Gaming will be focusing on accelerating the growth of this emerging ecosystem, combining the 7+ million highly engaged gamers using Opera GX  with millions of GameMaker creators. We are also thrilled to continue realizing synergies between YoYo Games' products and Opera GX."

GameMakerStudio is an integrated game development software, performance-tuned 2/2.5D engine that fuels many games, including multi-million hits like Risk of Rain, Undertale, or Hyper Light Drifter on an extensive range of mainstream platforms. Starting to build games with requires little to zero coding skills. Due to its extensive functionalities and ease of use lowers the barriers to entry and empowers a variety of creative people to make their games come alive and share them with the world.

Kolondra explained further:  "Performance is essential to even 2D gaming, and sustaining that performance across mobile devices and laptops as well as variable bandwidth and connectivity requires thinking outside of traditional application silos. The line between building good games and good browsers has been eroding for years - with gaming interactivity across internet connections ramping up and browsers growing more multi-function and sophisticated. Traditionally the two types of technology compete for hardware and bandwidth resources. But as Opera GX proved, there was a better way to address that competition and improve the experience  across both functionalities. YoYo Games' team, development expertise and studio relationships lay the groundwork for turning the Opera GX vertical into a new kind of horizontal. This horizontal opportunity is why we're building Opera Gaming and its infrastructure - so that we can further integrate gaming and browsing in ways beneficial to both in terms of not only monetization, but also experience."

About Opera and Opera GX

Opera is a global web innovator. Opera's browsers, news products and fintech solutions are the trusted choice of more than 380 million people worldwide. Opera's PC browser has surpassed 80 M MAUs. Opera is headquartered in and listed on the (OPRA). https://opera.com

In 2019 Opera launched Opera GX, a browser built for gamers with  features that include countless customization options, sound effects, background music, a gaming-inspired design, as well as CPU, RAM and Network Bandwidth limiters that make the browser less resource-hungry and leave more of the computer's resources for gaming. Opera GX has seen tremendous growth over the past year with a user base of more than 7 million highly engaged monthly active gamers. Opera GX's user base grew 350% between 2019 and and it continues to grow at a fast pace. Opera GX continues to receive high ratings (4.84 out of 5.0). It also recently launched  Discord server which quickly became number one in the Science & Tech community with more than 240K members.

YoYo Games is the home of GameMaker, the fastest and friendliest cross-platform game development technology out there. 2 has been completely redeveloped with usability and efficiency at its core, allowing developers to create games within a single code base and then publish them to run natively across multiple platforms including Android, iOS, HTML5, PS4, Xbox One, Nintendo Switch, Windows Desktop, OS X, Ubuntu, Windows UWP.

family of products has been downloaded more than 10 million times since 2012. YoYo Games is based in . www.yoyogames.com